Simplified: Dozens of couples in North and South Dakota – including several in Sioux Falls – were affected last week by the abrupt closure of a North Dakota-based photography company. The incident is now under investigation by the state's attorney general.

Glasser Images, a wedding photography and videography company based in Bismarck, N.D., closed without notice to both couples and subcontractors last Thursday.

The company sent an email telling couples who had booked their wedding services that they wouldn't be able to fulfill contracts or refund payments.

In an email to subcontractors obtained by Sioux Falls Simplified, the company said:

"Due to closing, we will not be able to provide any payments on any outstanding invoices. We know this puts you in a very difficult situation financially. For this, we cannot apologize enough."

Glasser Images Owner Jack Glasser did not respond to a request for comment, nor did his attorney, Tim O'Keeffe.

"I haven't been paid for about three months," Yost said, adding that when she reached out in the days before the closure, she was told she'd be paid shortly.

Who is affected here?

The full scope isn't known, but Liz Brocker, spokesperson for the North Dakota Attorney General's Office said that by 5 p.m. Friday, less than 24 hours after the company went dark, the office had received more than 170 complaints about Glasser.

The office has opened an investigation into Glasser Images, Brocker confirmed.

Brocker encouraged affected couples or photographers in any state to direct complaints to the North Dakota Attorney General's Office.

What about the couples?

In Sioux Falls, Glasser's disappearance is affecting couples like Alicia Arango and Matt Robinson, a local nurse and teacher who are set to get married on Oct. 23.

"I've been picking up extra shifts at the hospital," Arango said. "We're going to have to make a tighter budget. I'm super stressed. We both are."

Another local couple, Dawn and Eric Horpedahl, had Glasser Images shoot video of their August wedding. Now, they're not sure if they'll ever get to see it.

"Pictures are great," Dawn Horpedahl said. "But you can't hear your vows being said again through pictures ... that's the hardest part for me."

Facebook groups – including one called "Hold Glasser Images Accountable" have popped up to connect couples with photo and video professionals who have availability and are willing to help those left in the lurch by Glasser.

What about the photographers?

There are others like Yost who have gone weeks or months without payment for work completed for Glasser Images.

Additionally, even photographers who didn't work with Glasser are feeling some of the strain of the closure.

Allana Rogge, who's been a photographer in Sioux Falls for nearly a decade and a professional for 17 years, said she's had inquiries from at least 10 couples over the last few days since the Glasser closure.

"I tend to book out about 18 months in advance," Rogge said, adding that she is doing her best to connect couples with others in the Sioux Falls photography community who might be able to help.

Though Glasser Images' closure leaves several photo and video professionals unpaid for their labor, the company did receive more than $500,000 in federal loans through the Paycheck Protection Program.

It'll largely be in the hands of the legal system.

The North Dakota Attorney General's Office investigation continues, and some chatter in Facebook groups indicates potential for a class-action lawsuit in the future, as well.

In the meantime, couples awaiting photo and video from Glasser face a good deal of uncertainty.

This week, we simplify the future of Falls Park and how the abrupt closure of a North Dakota company is affecting newly married couples in Sioux Falls. 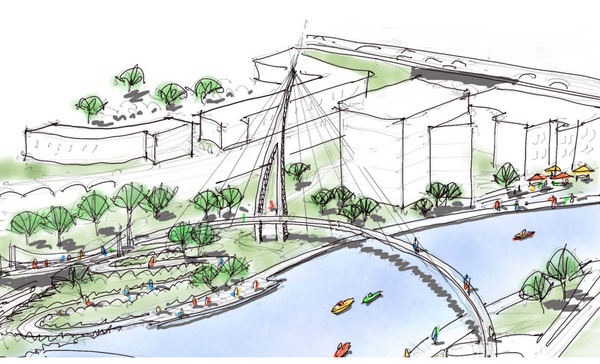 The winner of the Falls Park Design Competition is the first step in a likely year-long master planning process.