Weather check: Back to fall temps.

Simplified check: I've been pretty transparent about how Sioux Falls Simplified is funded, in part, through paid content under the "Simplified Presents" label, but just because a piece is paid for, doesn't mean it isn't also newsworthy, interesting and important to the community.

This week, (and all weeks, if I'm being honest) the sponsored stories are worth your time and attention. The funding from Silverstar and the Sioux Metro Growth Alliance gave me the resources needed to tell the story of an impressive local fundraising effort and an important election in Lincoln County.

I'll also simplify how The Link triage center is doing in its first few months of operation, why hundreds of kids are stuck waiting for after-school care, and how COVID-19 is affecting homeless people in Sioux Falls.

Simplified: Kids, Inc. – an after-school program administered in Sioux Falls School District elementary schools – is short-staffed, and the wait list is the highest it's been in recent years, officials say.

"We're not like a McDonald's where you can just function short-staffed," Miller said. "We have to have those people there every day ... there is no budging on that with licensing requirements."

What's contributing to the shortage?

The community came together to help this man get home

Simplified: Matthew Pangilinan was on vacation in Las Vegas when he went into anaphylactic shock and, later, cardiac arrest. The road to recovery will be a long one, but – thanks to a fundraiser supported by Silverstar Car Wash, Krav'n and the broader community – he'll be able to safely return home.

"I couldn't believe it," she said. "I work for a great company. The fact that they were willing to do that just showed the love and care that they have for me and for my son."

How COVID-19 is affecting people without homes

Simplified: City health officials are working closely with shelters in town and local health care providers to help vaccinate and test people who are homeless. But one big challenge they're facing is finding places for these people to isolate when they do get sick.

"We recognize that if we can get the majority of the population vaccinated, then we can very much live with this pandemic, and eventually it will run itself out," Chima said. "And hopefully life will return to normal."

What's behind the challenges? And what happens next?

What to know about the Lincoln County election next week

Simplified: Voters in Lincoln County will decide on Oct. 5 whether they're willing to pay a tax increase to fund road and bridge improvements for the next three years.

What does this mean for taxpayers?

Learn more on how we got here, what the levy would fund and where to vote.

The Link helped more than 1,000 people in three months

Simplified: Sioux Falls' new downtown triage center helped more than 1,000 people in the first three months of operation, and leaders at The Link say the facility is already reducing the number of people both in jail and in hospital emergency rooms.

"The Link isn't just for any one group of people," said Bill Early, The Link's new executive director. "It's for everybody, and we've actually seen that already."

The Link is working to continue to spread the word about the resources it has available for people in need of mental health or addiction support. It'll also keep connecting folks with existing resources in town.

"It's never going to be just The Link," Miller said. "It's a community partnership."

What I'm *fall*ing for this week:

What story do you want to see simplified? Falling for something local? Send any news tips, attaboys, missed typos or apple orchard selfies to megan@sfsimplified.com.

Voters in Lincoln County overwhelmingly voted down a plan to increase taxes for three years to fund road and bridge improvements. 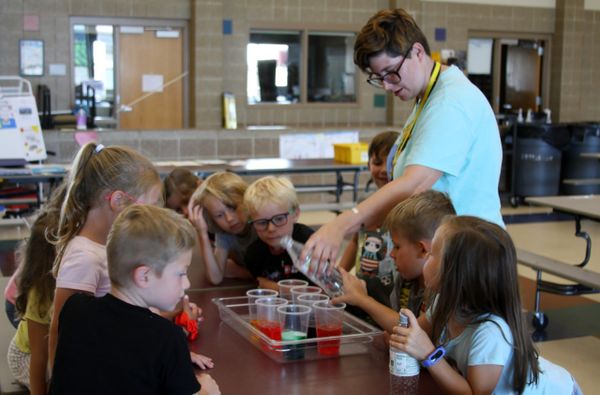 Kids, Inc. – an after-school program administered in Sioux Falls School District elementary schools – is short-staffed, and the wait list is the highest it's been in recent years, officials say.